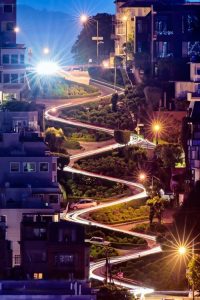 San Francisco is a fun city to visit. There are many unique neighborhoods within the city, experience many different cultures, restaurants, and cultural activities. There is truly something for everyone in San Francisco, even those who enjoy ghost hunting.

There are hundreds of haunted places in San Francisco. That is really no surprise in a city this old with a long history. One street in particular on Lombard Street has a unique history, but the house at number 1000 Lombard Street is positively spooky.

Lombard Street runs east-west on the grid system of San Francisco, California. The short section of the 1000 block, you will have seen its famous steep, slope with eight hairpin turns, said to be the steepest street in the world. But Lombard Street runs across the entire San Fran Peninsular. This small section is a major tourist attraction and receives around two million visitors per year, up to 17,000 per day on busy summer weekends, visit with care! 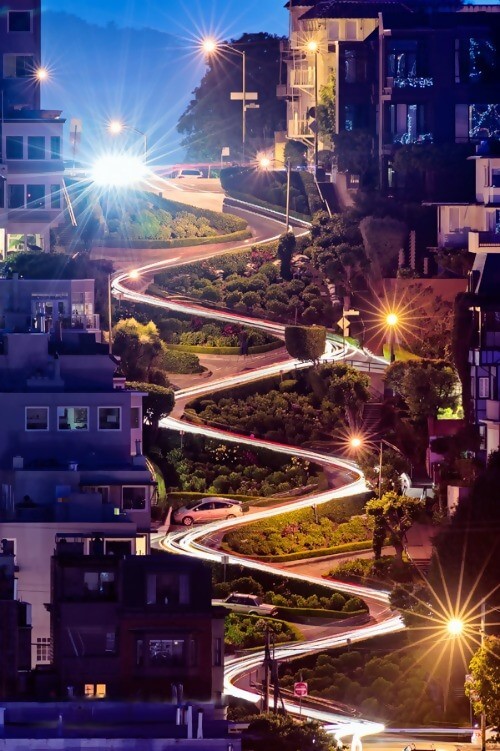 Lombard Street ends at its west end at the Presidio, the large park in the cities northwest corner. Lombard Street winds through the Russian Hill and Telegraph Hill neighborhoods. It takes a break at Pioneer Park and starts again at Winthrop Street and ends at The Embarcadero on the bayfront.

Lombard Street’s icon, the eight hairpin turns between Hyde and Leavenworth Streets, where eight sharp turns are said to make it the most crooked street in the world. The novel design was first proposed by Carl Henry, a property owner along the street in 1922. His proposal would reduce the steep natural gradient, which at 17% is too steep for most cars. Only 600 feet long and paved with red bricks, the street is one way, downhill, and has a top recommend speed of 5 mph.

Vehicles have up to a 20-minute wait to enter the steep section at peak times. In fact, to help reduce congestion and delays, visitors may be required to pay a fee and reserve a timeslot to drive down this popular part of the street.

The Powell-Hyde cable car stops at the top of the block of Lombard on Hyde Street. But even walking down this block of the street is pretty difficult.

By 2017, the twists and turns of this part of Lombard Street had become an icon, featured in movies, and in chase scenes in many films including Good Neighbor Sam, Dr. Goldfoot and the Bikini Machine, What’s Up, Doc? Magnum Force, and Ant-Man and the Wasp.

It also became a hot-spot of what has been called “San Francisco’s car break-in epidemic”, In 2019, 25,677 people reported car break-ins, according to data from the San Francisco Police Department, that’s 24 per 1000 people.

People live happily on Lombard Street, the Academy of Art University has a housing block there. There have also been famous residents on Lombard Street, artist Rowena Meeks Abdy, who worked in the style of Impressionism, a California painter at the turn of the Century. 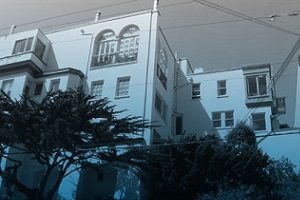 At the bottom of the most crooked street in San Francisco is a house with a very spooky past. Sitting high above the street, this ornate house was home to the queen of the San Francisco elite, Pat Montandon. Pat threw extravagant and sometimes wild parties at her house, Esquire magazine even voted her as one of the top hostesses in the nation. She wrote a book, later in her life called ‘How To Be A Party Girl’ not surprising really. Montandon met her match at one of her famous theme parties. She inadvertently crossed a vindictive tarot card reader. She threw a grand zodiac theme party and had as guests of honor palmists, astrologers, crystal gazers, and card readers to entertain and mystify her guests. The trouble began when Pat forgot to bring the tarot card reader the drink that she had promised him. Montandon later wrote about the incident her book The Intruders:

“I’m so sorry. I’ll get you one–” But he didn’t allow her to finish. He bolted to his feet with his curious retinue following suit, and explaining loudly that he’d never been so insulted in his life. Quivering with rage he directed a stream of abuse at me: He had never been treated so rudely… I was an insufferable, ungracious hostess…he was leaving, but not before he made certain I would never have any happy moments in that house again. He fixed me with a glare, his face puffed and distorted: “I lay a curse upon you and this house. I do not forget, and I do not forgive. Remember that!”

That was the last happy party in the house after the tarot card reader uttered the curse. A series of strange and terrifying occurrences culminated in a mysterious death. An unnatural chill overtook the house, even though the thermostat was permanently set to 90°. Spots of deathly cold would cause Montandon’s dog to bark and growl at empty spots as if there was an intruder in the room. Pat Montandon would find doors in the house mysteriously locked from the inside, in empty rooms. Mournful screams would echo through the empty house. Mysterious blood-like stains would appear and mysteriously grow on the white ceilings of the house.

The curse reached a deadly plateau on June 20th, 1969. Mary Louise Ward, Montandon’s close friend and personal secretary, was staying at the house while Montandon was promoting her book, How to be a Party Girl.

One morning, a mysterious blaze broke out in the master bedroom. The fire department quickly arrived but were slowed by a locked front door. The door was however locked from the inside, also the master bedroom door was again locked. The lifeless body of Mary Louise lay inside. Fire department investigations were inconclusive about the cause of the fire, and the cause of death. Mary Louise did not suffer burns, nor had she been a victim of smoke inhalation. There were no signs of injury Her internal organs were undamaged and she did not suffocate. The most suspicious discovery was that she had actually died before the fire took place. Sadly, Mary Louise was not the last victim of the curse of 1000 Lombard Street. Two of Montandon’s close friends would also commit suicide in the house before the year was up.

After the two suicides, Montandon took the curse seriously and was now desperate to remove the curse from her home. She sent in psychics Gerri Patton and Nick Nocerino, who agreed to try and perform an exorcism. Nocerino and Patton went to work, and supposedly managed to take some photographs of the spirits summoned to the house. They eventually managed to rid the home of the Tarot Card readers curse, however, Montandon could no longer bear to live in the house that had seen three of her friends last days. The house had also nearly ruined her own life.

She moved out and abandoned the house, money was of little concern, she had recently married butter baron Alfred Wilsey, among two other spouses.

Ever since then the house has been quiet except for tourists who constantly travel there to view the most crooked street in the world.

San Francisco is a great city with tons of things to see and do. If you are visiting the city, you have to go and see Lombard Street for yourself. And if you are really brave, stop in front of 1000 Lombard Street. Take a picture and then look at it to see if any ghosts have popped up in your photo. Due to the terrifying curse at 1000 Lombard Street, only the very brave dare to stand out front.