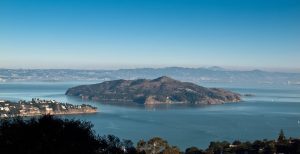 A poem carved into the Angel Island Immigration Station barracks states this: “This place is called an island of immortals, but in fact, the mountain wilderness is a prison. Once you see the open net, why throw yourself in? It is only because of empty pockets I can do nothing else.”

Created initially to process the anticipated flood of European immigrants entering the United States when the Panama Canal was finally opened, Angel Island opened its doors to weary travelers on January 21st of 1910. World War I was looming, and the immigration station here was intended to provide immigrants with an open door into America but instead served as a detention center for nearly 175,000 immigrants who arrived in America between 1910 and 1940. Most came from China, seeking refuge from the political and economic hardships they were facing in their homeland. The immigrants that stayed on the island were kept for months on end in small barracks that housed triple bunk beds. They were subjected to rigorous interrogations, which led to the denial of entry or unbearably long delays.

After the earthquake of 1906 destroyed most records that verified Chinese immigrants’ citizenship, many Chinese residents living in California were able to obtain citizenship for themselves and their ‘paper children.’ Citizenship papers were being sold to prospective immigrants, a promise of a new life resting in ink upon tree pulp. Entire villages worked together to purchase documents for just one village representative in hopes that they would return and share their expected wealth. Immigration officials responded by detaining all working-class Chinese immigrants for interrogation. The questions were unreal, things that most of us don’t remember, like “how many stairs lead up to your house?” or “how many chickens did you own back home?” Those whose answers did not match those of their ‘paper parents’ were deported, no questions asked. With this system in place, almost 10 percent of the detainees on Angel Island were deported. Rather than facing the humiliation of returning to their villages, many deportees committed suicide instead.

Immigrants were held on the island for months, even years, in prison-like conditions while they waited for hearings or appeals on their applications. The majority of the tragedy on this island was due to the Chinese Exclusion Ban, which was implemented after the Gold Rush in fear that American jobs were being ‘stolen’ by Chinese immigrants. Authorities on the island started to separate families to avoid ‘coached answers,’ and the immigrants began to write poems and stories expressing their homesickness, despair, and anger. Angel Island was turning into a demon for these people, their hopes of starting new dwindling with each day that passed them by. The energy on the island was changing, with doom and sadness taking the reins.

Angel Island was not only an immigration port, but it was also used to house German and Japanese prisoners of war during WWII, it has housed American soldiers, was once a missile testing site, and even a quarantine station to test immigrants for infectious diseases.

In 1891, the quarantine station on Angel Island was opened for use. Ships from foreign ports could be fumigated, and any immigrants suspected of carrying diseases would be kept here in isolation. The first ship to have its passengers quarantined on the island was the steamship China. On April 27th, 1891, she arrived into port and was suspected of having smallpox on board. When the passengers reached the station, they were immediately checked by a doctor and washed with carbolic soap, then put into overalls provided by the station. Imagine arriving in a new country, and this is the first experience you have.

Ghosts of Angel Island’s Dark Past

The torture experienced here remains in the permanently etched Cantonese poetry all over the walls of the immigration station. With all of the negative energy created from the separation of families, the suicides, the unknown, the fear, the sadness… it’s no wonder that Angel Island is considered to be one of California’s most haunted locations.

At least two documented deaths occurred at the Angel Island immigration station, with more having gone unreported. One was a laboring man from Antigua named John-Henry Stevens, who passed away due to hookworm infection. The other was William Sienang, the ship’s cook. He passed from inflammation of his kidneys due to a scarlet fever attack a year prior.

The most famous haunting of Angel Island is that of a young Chinese bride. She arrived at the immigration station with her husband, hoping to start a new life in California.  The woman was interrogated to such extreme lengths, and the decision to deport her back to China was made. She was so distraught by the decision that she went to her dormitory and put her wedding dress on – the one she would never get to be married in – as she hung herself with a bedsheet in the women’s restroom shortly after. After this tragedy, many of the immigrants staying in the dormitory reported feeling a sad presence in the bathrooms and experienced strange electrical issues. Many were so afraid of these happenings that they refused to shower alone.

However, one young girl had what is arguably the most terrifying experience with the ghost of the bride. She reported that she was awoken abruptly one night when an unseen presence started to press down on her chest. She was unable to breathe, and in a panic, she tried to scream. The pressure increased, as did the pain. The girl said she was only able to whimper a prayer, begging for her life. Soon the pressure stopped, and the girl was left alone in bed, gasping in a cold sweat. Had the bride tried to kill this young girl? If so, why? Is she angry that she was never able to enjoy her youth, that her life was cut short just before it began?

Visitors to Angel Island also have stories to tell. Disembodied voices are reported floating throughout the island. The crumbles of the buildings on the island are hiding places for apparitions, and the energy of the island itself hasn’t changed much since the early 1900s when it was a place of suffering and unlived dreams. Visitors report this heaviness, and some are so weighed down by the island’s past that they cut their trip short and leave as quickly as possible. It is said that sensitives can’t usually stay more than a few hours upon the island’s shores.

Today, Angel Island is a California State Park. People come to camp, bike, and hike the area and picturesque shorelines. Access to the island is by ferry or private boat only, and the remains of the old Angel Island immigration station can be seen after an eleven-mile hike from Ayala Cove.

Most of the immigrants who were brave enough to speak of their experiences on Angel Island stated that the two worst things about their stay were ‘the ghosts and the starving.’ The poetry etched into the cement walls of the immigration station goes to show two things – how long immigrants were held here and how heartbroken they felt the entire time. Carving stone takes days, weeks, months even – and when complete poems in Cantonese are all that remains of the time people spent here, it’s essential to read them and to connect with the souls who passed through here.