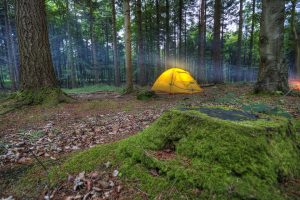 China Camp these days is a state park in Marin County, California. Surrounded by the beauty of the west coast, the park welcomes thousands of visitors a year and is known for its picturesque hiking and biking trails. It sits proudly on the National Register of Historic Places because of its important history and prevalence in California.

Prior to the 1700s, the area now known as China Camp State Park was inhabited by indigenous Coast Miwok people, who specialized in harvesting, fishing, and hunting the unforgiving coastal region. After the 1775 arrival of Spanish conquistadors, the Miwok were displaced from the area within 100 years. In 1884, the Spanish then granted much of the land to Timothy Murphy, an Irish settler who soon became mayor of San Rafael, California. In 1846, Murphy lost most of the land and died shortly after, the land then falling into the hands of two Sonoma county businessmen, John and George McNear. They established a massive dairy ranch, quarry, and brickyard in the area and soon realized they needed employees to keep the businesses running smoothly.

Soon, they started to employ a large number of Chinese immigrants, who then began to settle in the area.

How China Camp Got Its Name

By the mid-1880s, Chinese Americans had established a settlement of about 500 people in a village they called China Camp. Many of these villagers were originally from Canton, China, and supported themselves and their families here by shrimp fishing in San Francisco Bay. The village had three general stores, a barbershop, and a marine supply shop at its peak. China Camp was one of about twenty-six other shrimp-fishing villages along the coast that supported Chinese American immigrants fleeing San Francisco due to racial prejudice and persecution.

Following the 1906 San Francisco earthquake, the population of China Camp ballooned as nearly 10,000 residents of San Francisco’s Chinatown fled the destruction and mayhem.

In the late 1800s, the Chinese American fishermen of China Camp were catching close to 3 million pounds of shrimp per year, but with the passing of laws in the early 1900s that outlawed the export of shrimp, the population of China Camp declined rapidly, leaving only a few families remaining. By the 1960s, most of the surrounding area was owned and controlled by land developer Chinn Ho. In the early 1970s, Gulf Oil expressed interest in large-scale development in the area, including high-rise condos and commercial settings. Local residents and conservation groups protested, which led to the land being sold for 2.3 million dollars in 1976 to the California State Parks Foundation, who in turn sold it to the state of California to create China Camp State Park. Chinn Ho donated the 36-acre site of China Camp Village for preservation and as a living memorial to Chinese American history.

Unfortunately, all is not peaceful and happy at China Camp. The park is also known for the tragic 1975 barbecue murders, in which a local teenager named Marlene Olive and her boyfriend Chuck Riley murdered her adoptive parents Jim and Naomi Olive in the nearby suburban community of Terra Linda and then attempted to dispose of their bodies by cremating them in a barbecue pit at the park.

It is believed that the murders were sparked by an argument that Marlene had with her mother. She had complete control over Chuck, as he had pursued her romantically to no avail for a while before the murders. After the deed was done, Chuck had confided in a friend who helped clean up the murder scene. Marlene and Chuck then lived together in the family home where the murders took place for a few days, attending concerts, shopping, and eating at restaurants using her dead parent’s money. They planned to wait for Jim and Naomi to be declared dead, collect on their life insurance policies, and move to Ecuador. Chuck had told their friend after the murders that they ‘had to happen – they wouldn’t let me see her.’

Their plan did not go as expected when Jim Olive’s business partner began to grow concerned after not hearing from Jim for a few days. He contacted the police, and they visited the Olive house and spoke to Marlene and Chuck. Suspicions arose when they saw a freshly cleaned room in a home otherwise messy, and acting on Marlene’s or their friend’s statements, they went to the barbecue pit in China Camp State Park and determined that the pit contained fragments of human remains. Both Marlene and Chuck were arrested shortly after that.

Marlene Olive was only 16 at the time of the killings, and Chuck was 20. Chuck had met Marlene when she was just 15, and he was dealing drugs at her high school. He developed an unhealthy obsession with her and pursued her relentlessly. Eventually, they got together as a couple, and Marlene learned to control Chuck. She frequently threatened to break up with him if she did not get her way. This is especially sad when learning that since Marlene was a juvenile, she only served five years and was released when she was 21. Chuck is serving a life sentence and was eligible for parole in 2015.

The Desolate Magic and Spirits of China Camp

At first glance, China Camp seems like a ghost town, preserved for nearly a century and a half on the sandy shoreline of San Pablo Bay. Old wooden shacks are battered by the sea breeze and covered with faded advertisements. The bay’s weather adds to the mystique of the old shrimping village, with daily fog and drizzle.

While peaceful and quiet, the village is all but empty. Campers and day-trip visitors alike report this place to be one of the most haunted. People who dare stay the night at the park report an overwhelming feeling of dread and uneasiness and even being watched by unseen eyes.

This feeling is especially prevalent near the radio towers closer to Glenwood. Plenty of other ghostly encounters have come out of the park, including apparitions of demonic-like entities and misty people walking near the old buildings. Campers have also reported screaming and disembodied voices echoing from the woods late at night.

One very disturbing entity at China Camp is the Old Man. Some say he looks Chinese; others swear he’s Native American. He walks along by himself along Gold Hill Fire Road, and it is said that anyone who sees him should not attempt to make contact, say hello, or even let him see you looking at him. What may happen remains a mystery because no one is brave enough to find out!

There are a few reasons why China Camp is rich in ghosts, including the barbecue murders, Chinese immigrants being killed in a racially fueled fight back in 1956, or even the hundreds of Miwok people who passed away from disease here.

Even more recently, tragedy could have left a spiritual stain on the park. In February of 2021, authorities were called to the China Camp State Park with a report of a possible dead body. When they arrived, deputies located the body of a man about 30 feet off of the main road.

The death was initially thought to be suspicious but eventually turned into a homicide investigation. Still unsolved, this man’s spirit could still be trapped at China Camp until his killer is found.

Have you ever visited China Camp State Park? Don’t let its coastal breezes and beauty fool you, the checkered past of the area is palpable, and the spirits here aren’t afraid to let you know! For more about Chinese American history in San Francisco, check out our article on Angel Island.