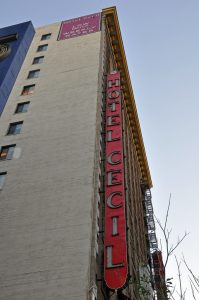 A Hotel Bathed in Blood

What started as a simple, budget-friendly hotel in downtown Los Angeles, Cecil Hotel soon began to turn its face more towards the darker side,  welcoming the likes of serial killers, suicides, infanticides, murders, and more. Located right off of Skid Row at 640 S. Main Street, the hotel opened its doors on December 20th, 1924.

The 19-story hotel has over 700 guest rooms, many of them filled with permanent residents. The hotel has a checkered past, with a long list of tragedies occurring within its walls. Negativity emanates from the bricks that construct the hotel, which has borne witness to over 80 deaths, murders, overdoses, suicides, and even housed The Night Stalker serial killer, after he, Richard Ramirez, decided that the Cecil was a proper nest to retire to after his murders.

Built in 1924 by three famous hoteliers, William Banks Hanner, Charles Dix, and Robert Schops, the Cecil was a destination for business travelers and tourists. Within five years of its opening, the United States started to sink into the depths of the Great Depression. The once fashionable and flourishing Cecil started its decline, as the nearby Skid Row area became fuller and fuller with transients, 10,000 or so homeless people lived within a four-mile radius from the Cecil Hotel. The hotel has been passed around a few times and is set to open back up for guests in October of 2021.

The first-ever (documented) suicide occurred at the Cecil on the evening of January 22nd, 1927, when Percy Ormond Cook shot himself in the head while inside his room after a failure to reconcile his marriage. Reports state that he was rushed to The Receiving Hospital and died soon after due to his wound. The following reported death was that of a W.K. Norton, who passed away in his room after taking capsules filled with poison. Throughout the 1940s and 50s, more suicides at the Cecil came into the light. In 2008, two long-term residents even coined the term ‘The Suicide’ for the hotel, and the name has stuck ever since. RoomSpook, a popular website that tracks hotel deaths, lists at least 13 suicides inside the Cecil.

In addition to suicides, the Cecil’s history also includes other extraordinarily violent and disturbing happenings. Shortly after its opening, it became a popular rendezvous spot for adulterous couples, sex workers, and drug activity.

In 2015, researcher Hadley Meares claimed that in 1947, Elizabeth Short, or ‘The Black Dahlia,’ was seen drinking at the Cecil Hotel’s bar in the days before her notorious and unsolved murder. Although there were no solid records that the Black Dahlia spent any time at the Cecil, other guests claim to have seen her there, and the negativity of the hotel itself surely drew her and her murderer near.

In 1964, tragedy struck the Cecil yet again when retired telemarketer Pigeon Goldie Osgood, a well-known and loved resident of the hotel, was found dead in her room. She had been raped, stabbed, beaten, and her room had been completely ransacked and destroyed. Jacques B. Ehlinger was eventually charged with her murder when he was seen covered in blood roaming around the streets close to the hotel. He was later cleared as a suspect, and Osgood’s murder remains unsolved.

Most of the Cecil’s recorded deaths are due to guests falling or jumping from their windows, plunging to their deaths below. However, some are uniquely disturbing. One instance is that of Dorothy Jean Purcell’s unnamed newborn son. After staying at the Cecil with her boyfriend Benjamin Levine, who was 38, she went into labor after having no knowledge of being pregnant. Not wanting to wake Levine from his sleep, she delivered the baby in the room’s bathroom and later threw him out of the window, thinking that he was already dead. Purcell was later charged with murder. After three psychiatrists testified that she was mentally unstable during the event, she was found not guilty by reason of insanity.

Another disturbing death was that of Sergeant Louis Borden, who slit his own throat in his room. He left several notes which explained that his declining health was the reason for his suicide.

To list all of the deaths that occurred at the Cecil would take an immense amount of time, as the list seemingly does not end. However, if you’re curious, here is a link to the Wikipedia page that lists every single recorded death at the Cecil Hotel, including names and stories as to what occurred, with the timeline starting in 1932, to the most recent death in 2015.

You can trust that we have glossed over a lot of awful happenings at the Cecil as we skip forward to 1984 and the time of the infamous Night Stalker. Unsurprisingly, the Cecil was the proven residence of serial killer Richard Ramirez, better known as ‘The Night Stalker.’ He murdered no fewer than 38 people during his time as an active serial killer and even disposed of bloody clothes and evidence in the hotel’s dumpster.

Ramirez was a regular presence on Skid Row, and according to the hotel clerk who claims to have spoken with him on numerous occasions, Ramirez is known to have stayed at the Cecil for a few weeks during his killing spree. Ramirez was seen by other guests on a few occasions entering the hotel, completely drenched with blood. Why did no one alert the authorities about him? The Cecil was known for its violence and bloodshed, and guests and residents alike were so used to the sight of blood here, they knew to mind their own business and kept their mouths shut. Ramirez found a comfortable home at the Cecil, which really shows just how horrible of a place it was.

Yet another serial killer, Austrian Jack Unterweger, also stayed at the Cecil in 1991. It was thought that he was attempting to copy The Night Stalker’s crimes. While at the Cecil, he strangled and killed at least three sex workers in the hotel and was convicted in Austria for his crimes.

Elisa Lam and the Cecil

Out of the 80 deaths occurring at the Cecil Hotel, 16 of them remain unexplained to this day, including that of Elisa Lam. Her story was popularized by the Netflix series Vanishing at the Cecil Hotel, which went in-depth into her life and stay at the Cecil. The story came into the light when surveillance footage of a young Canadian student, Elisa Lam, behaving erratically in the hotel’s elevator went viral online.

Social media investigators went wild with her story, claiming that she had been drugged, or she was murdered, and the hotel was covering up her death, or even that Lam had entered a different dimension in the elevator and ended up in the water tank where she drowned.

The video shows Lam repeatedly pressing elevator buttons, walking in and out of the elevator a few times, looking up and down the halls as if someone is following her, and strange hand and arm movements. It was recorded shortly before her disappearance, and her naked body was soon discovered in the hotel’s water tank after a few guests had reported their running water tasting strange.

The floor that Lam was staying on was one of few that did not have security footage, and her death was thought to be a homicide until her sister came forward and revealed that Lam had a history of not taking her medications for her extreme case of Bipolar Disorder. Later her death was ruled an accident due to drowning, as they claim that Lam had been hallucinating and stepped into the water tank to hide, believing she was in danger.

With all of the death, despair, and violence that has occurred throughout the Cecil’s timeline, it’s no wonder that the hotel is reportedly one of the most haunted locations in California. Some people even believe that Elisa Lam was being terrorized by the hotel’s spirits, which pushed her to her death. All of the bloodshed at the Cecil begs that question, is the hotel cursed? Is it haunted? Does its dark past attract more darkness?

Whatever it may be, the Cecil has attracted the attention of thousands of internet sleuths, true-crime enthusiasts, and ghost hunters, including Zak Bagans from the popular TV show Ghost Adventures.

When Bagans was interviewed about his time at the Cecil Hotel, he called the hotel ‘spectacularly frightening.’ Let’s dive in. Zak Bagans, being interested in the paranormal from a young age, now runs the Haunted Museum in Las Vegas, which you can read about here. He has a special connection with the Cecil because he has collected some of the Night Stalker’s drawings, clothes, and even his TV from his death row cell.

Bagans believes that dark energies dominate the hotel, and in an interview with Den of Geek, he said, “I’ve been to a lot of places throughout the world, but when you walk through the doors of the Cecil Hotel, you know there are other doorways to other worlds. If we were to see deeper dimensionally, we would see all these other doors and rooms, and I believe it goes way down into the earth and draws a lot of energy through the earth. It is then magnified by the dark energy and criminal activity of Skid Row and amplified by the rituals Jack Unterweger and Richard Ramirez did.”

He also stated that the Cecil was messing with him and his crew’s minds and electronic equipment. Investigator Aaron Goodwin was also overcome with feelings of rage while inside the hotel. Even a crime scene photographer was so disturbed being inside the hotel he needed to leave. Regardless of what’s going on at the Cecil Hotel, one thing is for sure; if we ever need a place to stay in Los Angeles, we’ll be making other arrangements.

Speaking of other arrangements, why not check out the haunted Cliff House and Sutro Baths while you’re in the bay area?