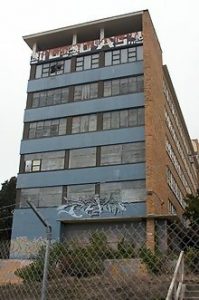 The city that you see today is very much different than it used to be. There used to be more abandoned buildings back in the day. In fact, there was a hospital that has a long history. This hospital would eventually be turned into apartments. However, this would happen long after the murders and paranormal activity that would occur. In fact, this building was abandoned from 1988 until 2009.

History of the Building

This hospital was known as the Public Health Service Hospital. It was first established in 1875. There were two wings of the hospital that were destroyed in 2009. However, the building was used as a school. It would operate as the Defense Language Institute from 1982 until 1988. All the students that were still in the building when it closed were forced to move. These students would be relocated to Monterey. The hospital was closed because the government was cutting funding. The plan was to sell the hospital back to the city. The building would remain abandoned for many years until the building was converted into housing units. It would open in 2010 as Landmark Apartments.

However, before the hospital was built, Spain would establish a military base on this land in 1776. Mexico would proceed to take over the base for a few decades. It wasn’t until 1846 that the United States gained control over the land. During the Indian War and World Wars, it would act as a staging and training area.

The hospital was called the U.S. Marine Hospital when it was first established in 1875. It would treat patients that were injured at sea and those who were merchant seamen. The hospital would later treat members of the Coast Guard and other people of the government. They would also treat refugees of Vietnam and Native Americans. This hospital would conduct much research on different diseases, especially the plague.

It was in 1932 that a new building was built to replace the older one. There were two wings added in the 50s to allow for more patients. These wings would allow 480 beds to be in the hospital.

It is said that there were weird placements of items inside the hospital. While it was abandoned, strange things would happen. Items would be placed in the weirdest ways.

The sixth floor of the hospital is said to be where the hauntings occurred. This is because this floor was used for medical research and experiments on animals. Because of this, there have been many odd happenings. Not to mention, this was a former morgue. Plus, there was a murder in the hospital in 2002. This is one of the eeriest places before the renovations occurred.

When the building was left abandoned for decades and this led to many people letting themselves in. People would make galleries out of their graffiti art. Many people would go into the operating rooms and even the morgue to hunt spirits and ghosts.

The land that the hospital was located on was an army base. This land is now known as the Presidio. It is a national park that many people will visit each year. However, the hospital is not the only thing you can find in this park. There are also two cemeteries and many military buildings. Many of the buildings have been converted and renovated, however, that doesn’t change the fact that there were military buildings there. Where there are military items and hospitals, there is death. There have been many different ghostly figures around this area.

The area is known as the Presidio today. One of the many encounters that happened occurs to those who live in the apartments today. One person stated that she would come home and all the drawers to her dresser would be open. Her medicine cabinet was also open. That isn’t the strangest thing that happened to this woman though. She would also come home to find her personal belongings all over the floor. This woman would also account for someone sitting on the end of her bed. No one would be there physically but the indent of a person sitting would appear.

Many people have reported seeing many other ghostly figures. Some people have seen ghosts knocking on their door for them just to vanish when they would be opened. Some ghosts would be that of army men who have been gone for years. The men would knock on the rooms that were unoccupied. Many people will encounter various cold spots throughout the building. Even after the renovation, the building is still haunted.

People who would sneak into the building before it was apartments would find some strange things. They would find that there seemed to be fresh blood. This blood would be located on a machine with a doll hanging above it. This was something that would happen frequently. People would notice strange things inside the hospital with strange placements. It is even said that a murder took place in 2002.

Many people claim that the building is haunted by that of their ancestors. One doorman claims that ravens will cry outside and it will echo in the building. However, there are no ravens in view. Many people such as the seamen and Native Americans will cry out for justice.

Many of those who walk into this place will walk right back out. A lot of people will feel something when they walk into the apartments. One person stated that they walked into these apartments without knowing the history and stated that they felt uneasy. The woman stated she looked around and left immediately. She stated she felt like she was in an insane asylum. It was not an area where she would want to live in. Especially since there is a cemetery out back. The place gave this woman bad energy.

Many people remember this building as that spooky building that would stand above the miraculous homes found on Lake Street. The hospital was home to tons of graffiti and even broken windows. This was easy to find because it was such an eyesore. Plus, people knew it was haunted just by looking at it.

It is believed that the spirits haunting the area are that of military soldiers. There are said to be many spirits of the soldiers still present to this day. Plus, there are many different energies that are around. People will notice that their things have been moved, items open, and personal belongings were strewn about. This is a place where there is a lot of history. This history will not be going anywhere soon because of the many entities that have made this place their home.

If you don’t believe us, take a look for yourself. Many people claim that they can feel bad energy and spirits by simply walking into the lobby. It is up to you to decide what you believe happened and if the place is really haunted.