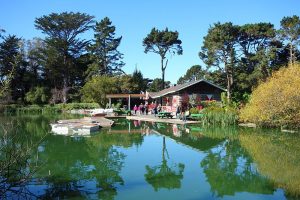 Golden Gate Park was originally created on 1,013 acres of windswept and wild sand dunes in an unincorporated area of the Peninsula, known as the ‘Outside Lands.’ Starting in 1870, surveyor William Hammond Hall started the park, which now boasts over 1,017 beautiful acres. The park is host to many fairs and events and is a popular spot for locals and visitors to California to just lay a blanket and hang out for the day. The park’s history starts all the way back in the 1800s when it hosted the California Midwinter International Exposition of 1894, the first world’s fair held in the United States west of the Mississippi. It offered over two million visitors a glimpse of things to come in its 180 structures. The footprint of this fair is today’s Music Concourse.

Stow Lake is a manmade lake inside of Golden Gate Park with just as rich a history. The lake has provided countless San Franciscans with an excellent outdoor escape for over a century as they flocked to the city’s scenery and allure. The park offers hiking and biking trails, rowboats across the lake, picnicking, wildlife observation, and even ghost hunting which has gained quite the following throughout the years.

The park also played a critical role after the 1906 earthquake and fire that shook the streets of Northern California. Two hundred thousand homeless residents used the vast park as a camp, surviving in crude shelters and later temporary wood barracks while homes and streets were rebuilt. Speaking of the 1906 earthquake and the following disasters, the history of the hauntings here dates back to before the ground shook.

The Lady of Stow Lake

One of the oldest documented hauntings in San Francisco, the story goes like this: in the years before the 1906 earthquake, a young woman lived in San Francisco with her infant child. One day, the woman decided to take her baby for a walk around Stow Lake to take in the fresh air and scenery of the beautiful park. While on their walk, the woman saw her friend, and the two sat down on a bench to gossip and catch up. After a few minutes of chatting, the woman turned to check on her baby. To her despair, the stroller was no longer beside her; her baby had vanished into thin air. Panicking, she ran around the lake, screaming for her child. She was horrified; someone must have taken her baby! The last anyone saw of her alive was the moment of horrid realization when she ran into the lake. Another version of the story tells that in the Victorian era, a woman went boating on the lake with her baby, and when her baby got a bit too close to the edge of the boat and fell in, she went in after trying to rescue her child, but they both drowned in the process.

For the last century, it is said that you can see a distressed woman in a white gown stalking around the rim of Stow Lake on particularly foggy nights. Some even report that she approaches visitors, begging them to help find her baby. Others only report hearing moans echoing across the lake. In fact, the story has become so famous that the official website of Golden Gate Park even dedicated a page to the legend.

Avid ghost hunters have flocked to the park for decades, hoping to catch proof of the paranormal on film. Once the sun sets on Stow Lake, it’s hard to see a few feet in front of you. One investigator, Tommy Netzband, went to Stow Lake with a member of ABC 7 News.

He clutched a handheld digital recording device in one hand and spoke loudly across the lake ‘is there a woman here at Stow Lake that wants to say something to us?’ Tommy Netzband is the founder of the San Francisco Ghost Society in San Francisco and says that the device he’s using has caught many disembodied voices before. He tells that locals claim if you come to the lake after dark, you will see the woman floating above the water.

History corroborates this legend, as there was an article published in 1908 in the San Francisco Chronicle that tells of two couples that were in the park, who were then pulled over by a horse-mounted police officer. They were frantic, sweating, and afraid. When the officer finally got them to calm down, they had claimed to have seen the woman of Stow Lake, described as a woman floating out of the water in a long white dress, long hair, with a bluish glow surrounding her entire body.

Local legend tells that if you drive your car into the park near the lake, it will stall. Another story goes that if you say ‘woman of Stow Lake, I have your baby’ three times, she will appear to you. These don’t seem to be much more than urban legends, but the haunting of the lake is real to most.

Netzband believes that the woman of Stow Lake is not, in fact, an intelligent, spiritual haunting, but a residual one. A residual haunting is basically an energetic imprint left behind from some sort of tragic or traumatic event, replaying over and over throughout history.

Other Hauntings at Golden Gate Park

Not only is there a lady of the lake at Golden Gate Park, but there is a reportedly haunted statue as well. The Pioneer Mother statue at Stow Lake has been reported to move her head as if looking for something on the grounds (perhaps the missing baby?’

Other stories of the statue tell that it has been oddly damaged in ways that suggest paranormal activity. Cracks have appeared on the statue’s head, unlike your everyday run-of-the-mill vandalism. Unexplained voices and footsteps are also reported often around the vicinity of the statue. It seems a strange coincidence that a statue of a mother is haunted at a lake where a woman lost her child.

There’s also talk of a ghostly police officer who roams Golden Gate Park. Drivers have been pulled over by a man who they say ‘looks sick,’ and when they go to pay their issued tickets, there is no record of one even existing with their name. In addition, the police officer who writes the ghastly tickets isn’t an active or working officer of the city or park. It has also been revealed that the officer in question has been dead for over a decade. What’s worse than getting pulled over and written a speeding ticket? Receiving a speeding ticket from a cop in the afterlife!

Golden Gate Park holds many mysteries and tales inside of its borders. From mysterious disappearances to unsolved murders from centuries past. If you visit Golden Gate Park, don’t forget to take in all that the park has to offer. Stunning scenery, public attractions, and even a floating ghost-woman at Stow Lake.