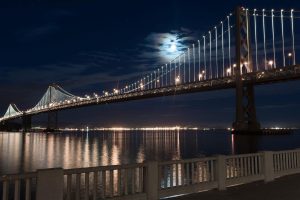 The Bay Bridge is one of many bridges that connects San Francisco to the rest of California. While it might be mistaken for another bridge (i.e.–The Golden Gate Bridge), the structure is a piece of architectural genius that makes it a sight to see when you’re not on the bridge itself. However, while so many are driving through it in each direction (heading towards the city or out of it), the bridge itself might be the site of some strange happenings. Is the Bay Bridge of San Francisco as haunted as some people think? Find out by reading more about the bridge itself and the possible stories of why one of the many bridges that connect to the Bay Area just might be one of the most haunted places in all of the Golden State. 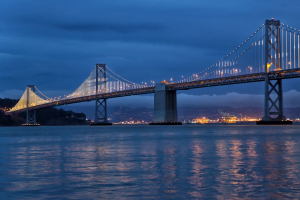 During the Gold Rush, goods shipped to San Francisco would only arrive by way of a boat (if the products were not made locally). When the Trans-Continental was completed in 1869, it became apparent that San Francisco was separated from the railroad due to the city itself being situated on the west side of the bay (the terminus of the railroad was on the east side of the bay). Since the inaccessibility issue was a major threat to San Francisco’s status as a trading hub, considerations of constructing a bridge were soon being looked into. However, one of the key supporters of the bridge was an interesting fellow to say the least. A man known as “Emperor Norton” was a self-proclaimed “Emperor of America” who had crazy ideas that did not sit well with the public (and was often a figure of ridicule). However, the idea of building a bridge between San Francisco and Oakland (located on the east side of the bay along with the railroad) was not so crazy.

Since the early 1870s, talks of building a bridge had begun to take shape. However, because of the bay’s width it seemed impossible to build because of the numerous engineering and structural demands. The bridge project appeared to have been put to rest at the end of the 19th century. However, the idea of installing an underground tube in the 1920s had been floated around. But the plan was quickly scrapped for fear of inadequate amounts of traffic to support it. The bridge idea was resurrected once again when it became apparent that the automobile was quickly gaining popularity and its usage by citizens was growing rapidly.

After a few years of funding and legislation being approved by the State of California, the Bay Bridge was finally being constructed. In 1933, construction began and would last three years. Along the way, 24 construction workers were killed due to construction-related accidents or other incidents. When the bridge was opened up in 1936, it didn’t take long until chaos settled in. That came in the form of numerous traffic jams that would soon occur on a regular basis. To alleviate the issue, the construction of a tunnel and even a rail line were soon in the cards. Over the years, the bridge would undergo some minimal renovations and upkeep projects. However, the bridge sustained major damage when the Loma Prieta Earthquake of 1989 shook most of Northern California. The upper deck of the eastern truss had collapsed as part of the impact. The collapse had indirectly caused the death of a motorist who was passing through the bridge when it happened. The bridge was closed for nearly a month to repair the damage.

About twenty years earlier, a Navy aircraft had crashed into the cantilever span of the bridge killing both occupants on board. The crash did not injure or kill any motorists. One of the trusses on the bridge was badly damaged and later repaired as a result of the air crash. Despite the tragic events that had occurred on the bridge, it might have also been the place where many people may have jumped to their deaths. Could it be possible that the spirits of those who may have died on the bridge (or off of it) still haunt the Bay Bridge even to this day?

The stories of numerous hauntings on the Bay Bridge is said to be told by many locals. Even some who have traveled on the bridge regularly have often heard a knocking sound on their car windows. There had been one recount of a driver who said that he saw what appeared to be a headless man apparently running next to them going the same speed as their car. Rumor had it that it may have been the specter that belonged to the victim who was killed on the bridge during the 1989 Loma Prieta Earthquake.

It’s been said that a ghost of a man killed in a car crash on the bridge may also have been seen sometimes. In 1948, a man traveling on the bridge when his car ran out of gas. While attempting to call a tow truck that was situated near the bridge itself, the man was struck by a speeding car and was killed instantly. Rumor has it that he may be seen out of the corner of people’s eyes. If you look straight forward towards him, he will disappear. Some have described the man wearing a raincoat and a 1940s style hat.

There had been some numerous claims of a “ghost cop” that patrols the bridge and has been a sighting for most travelers. Some have reported seeing a cop with no squad car use the phone that was apparently attached to one end of the bridge. Others had seen a cop on a motorcycle travel behind them, only to disappear out of thin air when the driver somehow pulls over.

Even regular commuters have frequently been making double-takes each time they have traveled on the bridge to make sure they haven’t seen any apparent spirits or figures moving around. Some would recall seeing some movement out of the corner of their eye (and not the kind of movement that matches a passing car).

Is It Worth Checking Out?

If you have a good amount of patience, you can probably check it out by way of driving through the bridge both ways (if you must). However, driving in California can be quite intimidating since there is a constant flow of traffic on these bridges depending on where you go. However, there should be no guarantee as to whether or not you’ll see a spirit or even experience some kind of paranormal activity.

If you don’t see anything, don’t despair. There are plenty of places in the San Francisco Bay area that you can check out for the purpose of some good old-fashioned ghostly fun. After all, you are in a city where you can explore Alcatraz or even visit the outskirts of a park located on the other side of the Bay Bridge. It’s been said that on a foggy night, you may see a shadowy figure standing on the side of the road. Keep in mind that you are not out of any ideas to visit some of the most haunted places in San Francisco.

The Bay Bridge might be a place that may be the subject of some haunting ghost stories that only the locals can tell. If you ever make a trip out to the Bay Area, it never hurts to drive through the bridge to see if you are able to spot something. You may be lucky or not. Either way, it’s all part of an excellent adventure that requires all kinds of time, patience, and maybe that feeling of going on an adventure that no one would ever dare go. If you indeed come across something, you can keep it to yourself or tell your friends.