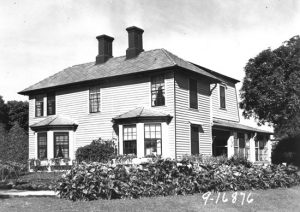 San Francisco is one of America’s most eclectic and historical cities. It was the hub for the hippie generation and the birthplace of counterculture in the United States. It’s always been a place of strangeness and a haven for self-proclaimed weirdos. Two hundred and forty-four years of history marinates in the city’s streets, creating the perfect backdrop for some of America’s most haunted locations. Fort Mason, a bustling army base for over 100 years, is home to The Haskell House. If you’ve lived in the bay area for long, you’ve probably heard of it once or twice. Have you ever wondered why it’s so paranormally active? Read on to find out.

History of The Haskell House

The Haskell House is located near the corner of Franklin Street and McDowell Avenue in Fort Mason. It’s well known in the area as ‘The Quarter’s Three’ and has a long rap sheet of strange occurrences. The home itself dates back to the 1850s and hosted a succession of military men since it was confiscated by the Union Army in 1863 to be used as officer’s quarters. As you know, a lot of private property was taken over for war efforts, and The Quarter’s Three was no exception. The Haskell family wasn’t happy about the terms of the confiscation. Leonidas Haskell, a major on General Fremont’s staff during the Civil War, fought unsuccessfully to get the house back until he died on January 15th of 1873.

In the 1850s, California was stuck between pro-and anti-slavery forces. The result was a stand-off, as California had the strictest laws against African-Americans outside of the South. Just after California won its statehood, lawmakers decided that any black person in the state could be brought before a magistrate and claimed as a fugitive. In the ensuing proceedings, the victim was not allowed to testify, so the magistrate would inevitably hand over a certificate of ‘ownership’ to the captor. Even those against this heinous act were afraid to help, as fines and jail time awaited anyone who assisted a proclaimed ‘fugitive slave.’ Senator Broderick and Leonidas Haskell were outspoken opponents of slavery, and David Terry was a rabid pro-slavery activist. You can see where this is going.

Senator David Broderick lived at the house in the 1850s. He also died here when he got into a duel over political differences with Supreme Court Justice David Terry in September of 1859.

Originally good friends, they both belonged to the Democratic Party and held a lot of the same beliefs. Broderick even said that Terry was ‘the only honest man on the Supreme bench,’ and Broderick was the only one who did not turn his back on Terry in his time of need. This all changed after Terry had failed to be re-elected. He believed that his failure occurred because of Broderick’s anti-slavery campaign. On the other side, Broderick thought that Terry was trying to bring his campaign to a halt.

‘I see that Terry has been abusing me. I now take back the remark I once made that he is the only honest judge in the Supreme Court. I was his friend when he was in need of friends, for which I am sorry. Had the vigilance committee disposed of him as they did the others, they would have done a righteous act.’

The situation soured even more when Terry attempted to be renominated as Supreme Court Justice but was denied the nomination because of Broderick’s efforts. After a few heated letters back and forth and a few months of pressure building up, it all came to a head on September 30th, 1859.

James O’Meara provided an eyewitness account of the duel. He wrote:

‘His rigor of frame was so intense that, in the effort to adjust his pistol to the required position, he was obliged to use his left hand to bring his right arm into proper form; and in the effort, he also swerved his whole body that his right leg was pressed out of place, downward and forward, out of line with the left leg, and his chest was thrown out and quartering toward his antagonist, so as to present a larger surface for the chance of a shot aimed at him. He held his pistol in a vise-like grip, and his wrist, instead of being in condition for ease of motion, was as an iron bolt, to move only with and as rigidly as the arm. He seemed the impersonation of that order of courage which faces death without terror, which prefers doom to the reproach of fear.’

After Broderick was wounded and fell to the ground, one of the spectators attempted to charge Terry with a pistol. His name was Davis, and he claimed to be one of Broderick’s best friends. He was outraged at what he had interpreted as murder. After being shot, Broderick returned to the home to recover from his injuries. Unfortunately, he succumbed to his wound and died only three days later inside the Haskell House on September 16th, 1859. One of Broderick’s last sentences was, ‘they have killed me because I was opposed to slavery and a corrupt administration.’

Over its history, the house has developed a reputation of being haunted. Colonel Cecil Puckett, who lived in the home during the 1970s, reported that he felt someone following him around the house at all times, and he even felt that he was being watched while he was in the shower. Captain Jim Knight was a deputy commander and spent two years in the Haskell House. When asked if he thought the home was haunted, he mentioned that there was no doubt about it. He reported that even though he didn’t see any apparitions, the strange occurrences were enough to convince him. He noted once being down in the kitchen, and the lights would turn on and off by themselves. He also had a toilet that flushed on its own.

The next tenant, Captain Everett Jones, didn’t believe in the supernatural at first. After he had moved in and gotten settled, he threw a housewarming party with his friends and coworkers. They had been joking about a ghost being in the house, and the morning after, as he was cleaning up from the party, he was in the kitchen when he heard a loud unexplained crash. Upon further investigation, he had found a picture had crashed to the floor. Not too strange until a look at the back of the frame shows a secure hook and a nail still stable in the wall. The captain had believed that someone (or something) had pushed the picture from behind. Another incident occurred not too long after where five pictures fell off of the same wall. A light fixture even fell off of the ceiling right in his daughter’s bedroom. Within six months, the family stopped joking about the ghost.

Since then, unexplained happenings continue to occur. An unseen force pushed out a painter working on the windows, plants tip over by themselves. Shadow figures are caught moving from room to room. Over the years, an entire mosaic of spirits has been witnessed, including a man in a top hat (which is believed to be Haskell pacing the home) and a group of African-American spirits in the cellar. People think that the spirits in the cellar were underground railway passengers hidden by Haskell and Broderick.

A Death Not In Vain

After Broderick was killed in the duel, he became a sort of anti-slavery martyr and set up California to be one of the most progressive states in the country. Free-state forces rallied to lynch Terry and take permanent control of the reins of power in San Francisco. By the outbreak of the Civil War, California was in the Union camp due to the death of Senator Broderick years before.